On June 7, 2022, the Inter-American Dialogue, in partnership with the Office of the Mayor of Los Angeles and CAF-Development Bank of Latin America, hosted the first Mayors Summit ahead of the IX Summit of the Americas.

Amid increasing gridlock at the national level across much of the Western hemisphere, due in many cases to political polarization, policies generated at the local level are more important than ever. Communities are turning to their mayors and other subnational leaders for critical action in response to today’s most pressing issues.

The Mayors Summit was comprised of a series of workshops that featured twelve mayors from Latin America, the Caribbean, and the United States along with representatives of multilateral institutions and subject matter experts to share and compile best practices on shared challenges. The event focused on two major topics affecting cities and towns across the region: climate change adaptation and a response to the hemisphere-wide migration crisis.

This high-level event kicked-off the Inter-American Dialogue’s new Cities Initiative – a crosscutting project that will draw on the expertise of the Dialogue’s core programs, including education, migration, the rule of law, climate, and our analysis of Asia’s engagement with the region to explore local responses to national and transnational challenges. As part of this initiative, the Dialogue and CAF-Development Bank of Latin America announced that they will host the Mayors Summit on an annual basis to provide a space for further subnational collaboration across the region. In addition to the annual Summit, the Inter-American Dialogue will host a series of gatherings of subnational leaders throughout the year on themes such as women’s economic empowerment and combatting crime and violence.

“Innovative policies generated at the local level are more important than ever, especially with national governments paralyzed by polarization. In many cases, it is the mayors who propose the necessary and creative solutions.”

Climate adaptation is fundamental for both large cities and small towns, especially for vulnerable populations living below the poverty line, many of whom reside in informal settlements exposed to the many adverse effects of climate change, including flooding and landslides. With 48% of the Latin America and Caribbean region’s capital cities under extreme climate risk due to location, concentration of population, and inadequate infrastructure, local-led responses to climate change are of the utmost importance.

Mayors highlighted the need to increase investments in climate-resilient infrastructure and transport along with pollution reduction, which directly impacts the quality of life of citizens and the ability for cities to respond to climate phenomena. Mayors also discussed the importance of reducing the gap between adaptation measures and financing needs, highlighting the importance of multilateral development institutions such as CAF-Development Bank of Latin America and the World Bank as local governments seek to acquire the necessary tools and resources to address climate change. Other topics discussed were green transportation initiatives, the negative impact of urban construction on natural resources, and the impact of extreme weather on vulnerable communities.

The session concluded with a call to action to develop a common agenda to better navigate the effects of climate change and create initiatives that focus on the most vulnerable populations, such as women, indigenous and Afro-descendent communities, and youth. Mayors emphasized the importance of local initiatives as catalysts for broader, national-level climate-adaptation projects.

The second session focused on the hemisphere-wide migration crisis, which has resulted in significant challenges for local actors who are the first line of response for assistance and integration of migrants and displaced people. While decisions regarding national immigration policy are made at the federal level, the Mayors Summit was an important reminder that many of the most innovative immigration policies originate at the local level. Participants highlighted the fact that local governments are the ones feeling the pressure and in many cases developing inclusive solutions.

Civil society actors present in the session raised the importance of providing immigrants with social and economic opportunities, and presented the idea of city-led advocacy where municipal governments would work with non-governmental actors to support new arrivals, especially in the face of growing xenophobia. Mayors agreed on the need to focus on inclusion and added that multilateral development institutions should place equity at the center of their investment strategies when it comes to migration. Mayors also discussed the opportunity to define a new urban agenda that supports human mobility processes and reduces the indexes of forced migration.

The session concluded with a discussion of the importance of investing in social inclusion programs, building excitement instead of fear around the topic of migration, and showcasing the value that these individuals bring to their host communities.

The workshops were followed by a networking lunch featuring remarks by the United States Under Secretary for Economic Growth, Energy, and the Environment, Jose W. Fernandez. The day concluded with a high-level session with the 71st United States Secretary of State, Antony J. Blinken who used the Mayors Summit to announce the Cities Summit of the Americas to be held in Denver, Colorado in April 2023 and which the Inter-American Dialogue looks forward to supporting.

Met with mayors from across the U.S. and the broader Hemisphere in Los Angeles today to build partnerships towards more sustainable and resilient cities. I announced that we will host the first-ever Cities Summit in Denver in April 2023. pic.twitter.com/GynIK77KpR

Joel Martinez – Mayor of Port of Spain, Trinidad and Tobago

Rebecca Bill Chavez – President and CEO of the Inter-American Dialogue

Esteban Moctezuma – Ambassador of Mexico to the United States 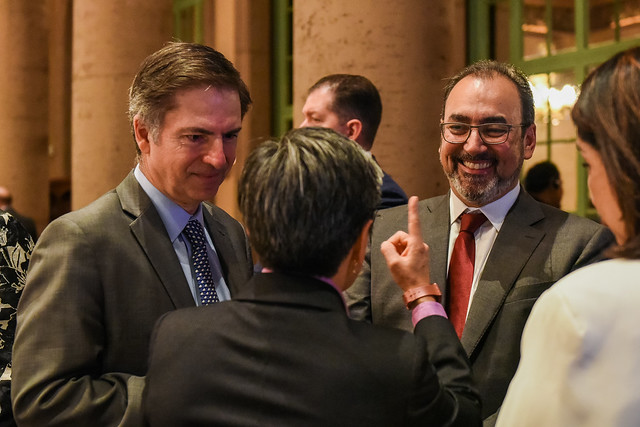 Has Obama Kept His Summit of the Americas Promises?

It was just over a year ago that leaders of 34 nations of the hemisphere gathered in Trinidad and Tobago for the Summit of the Americas. How much progress has been made in the past year on the goals expressed at the summit?

Among Latin Americas, there is a growing consensus that the root cause of their violent crime wave is the massive use of narcotics in the US.

The VI Summit of the Americas could spark a more serious and mature debate on drug policy.