On December 7, 2018, the Inter-American Dialogue’s Working Group on Latin America met for its 31st session. Dating back to 2001, the group is one of the longest-running and most successful initiatives at the Dialogue. It brings together a select group of political, academic, and civil society leaders from across Latin America to discuss the most pressing issues facing the region. Sessions are intended not only to help shape the Dialogue’s agenda but also to guide policy cooperation in a broader sense. With meetings alternating between Washington, DC, and cities in Latin America, the program is unique in its breadth and long-term perspective. No other project regularly brings together such a group of distinguished experts for a frank, off-the-record discussion on hemispheric affairs. This year’s gathering took place in Mexico City, less than a week after the Lopez Obrador government began.

At this meeting, the group focused on a variety of topics in the Americas, with special attention given to Mexico during the first part of the session. The Mexico discussion revolved around the new administration’s plans to address the country’s security and corruption challenges, as well as high levels of poverty and inequality. Further discussion centered on impunity and corruption in Central America, what we can expect from the incoming Bolsonaro government, Argentina’s prospects over the coming year, Venezuela’s deepening crisis and regional implications, the political outlook in Colombia and Peru, the relationship between the United States and Latin America, and China’s deepening engagement in the region. To discuss security, economics, drug trafficking and corruption in Mexico, the group had the opportunity to meet with four members of the new Mexican administration: Alfonso Durazo, secretary of public security; Graciela Márquez, minister of economy; Zoé Robledo, undersecretary of the interior; and Irma Sandoval, head of the Public Administration Ministry.

Mexico faces record-setting levels of violence. The causes of this increasing level of insecurity include the vicious cycle of corruption and impunity, the lack of collaboration, resources, and training of the police forces, and the lack of opportunities, poverty and marginalization, particularly of the Mexican youth. Participants discussed the importance of violence in the most recent elections, the lack of trust in the police force, and the impact of drug trafficking and organized crime. Impunity and corruption within the police were addressed, and how the institutional design of those offices that deal with this issue cripples their efficiency due to their lack of independence.

On the country’s economic policies, the new administration would like to make youth one of its priorities by developing social programs that empower those between the ages of 15 and 29 to address the increasing drop out rates, less access to job opportunities, and higher levels of violence and insecurity. Training in IT skills will receive special attention as a bridge for future employment.

On the drug question, the AMLO administration wants to take a comprehensive approach that will look at the process starting with cultivation and ending with consumption, with special attention to rural areas, organized crime, youth, and those people that have been forcibly brought into trafficking. The need to improve the working relationship with the US on narcotrafficking was also discussed, as well as the impact of violence and migration from Central America in Mexico. Participants also emphasized the importance of cooperation with other Latin American countries such as Colombia and Brazil, the need for an institution to address the complex drug issue, the impact of extortion and human trafficking, and viewing the police not just as perpetrators but also as victims in this context.

The discussion on corruption started with the acknowledgment of the widespread discontent of Mexicans and the perception that politicians are corrupt. Regionally, participants focused on Central America and how corruption starts with campaign finance, undermines institutions, and spreads into the private sector, where corrupt practices have become the modus operandi. Furthermore, the economic slowdown magnifies the perception of corruption. In Latin America, corruption has gone from an individual action to a more systemic phenomenon, which is harder to deal with. Its end goal is no longer just financial gains, but reaching power and staying in power.

Moving to South America, Venezuela was the center of the discussion. Participants agreed that addressing the humanitarian crisis is necessary, but the region also has a responsibility to focus serious attention on the causes of this crisis. If Latin America does not understand this role and looks away, it is becoming part of the problem. Given the lack of power in the opposition and the inefficiency of sanctions, participants discussed the importance of reducing the exit costs of the Maduro regime and helping Latin American countries, the OAS, and the Lima Group come up with courses of action that reduce the feeling of paralysis.

In Brazil, Bolsonaro’s election signified a rupture with the traditional party structure. Few had predicted his shocking election. The biggest challenge ahead for Brazil is a large fiscal deficit for which Bolsonaro will have to pursue reforms if he wants to avoid a government shutdown. Opportunity for growth exists in the creation of jobs, particularly for the youth. The challenge of high levels of informality remains. In terms of foreign policy, Bolsonaro promised an alignment with Donald Trump and seems to want to step away from China, although China is Brazil’s largest trade partner and third largest investor. As a result, China’s absence would be detrimental to Brazil’s economy. To understand the current crisis in Argentina, participants argued that Macri’s election should be seen as a campaign organized around anti-Kirchnerism. The group also debated what level this recession will have to reach in order to affect the 2019 election and whether Peronism has the potential to make a comeback.

On Colombia, Duque’s quick loss of popularity was discussed, and how his election was an anti-Petro vote rather than an election for his campaign and proposals. Some participants felt that Duque is very knowledgeable but lacks direction and a clear purpose. He has a very technical cabinet, but one with limited political experience. The feeling is more uncertain than negative, but his administration lacks clarity in key issues such as the peace process.

Regarding Peru, participants discussed the complicated and uncertain political situation. Vizcarra is the big winner of 2018, ready to stay in power until 2021, with a strong approval rating and showing progress in anti-corruption efforts.

Finally, the group discussed the US – Latin America relationship. Participants remembered how during this same meeting a year ago, this discussion was centered around Trump’s lack of policy towards Latin America. Now there is one, but it seems centered around attempting to counter China’s growing engagement. China maintains an advantageous position in the region since it can provide quick funding for infrastructure projects even against the economic cycle – something that the US is not able to do. The US-China rivalry can increasingly be seen in the region.

This meeting was by invitation only and off the record.

Martha Bárcena – Ambassador-designate of Mexico to the United States

César Montúfar – Professor and former member of the Ecuadorian Congress 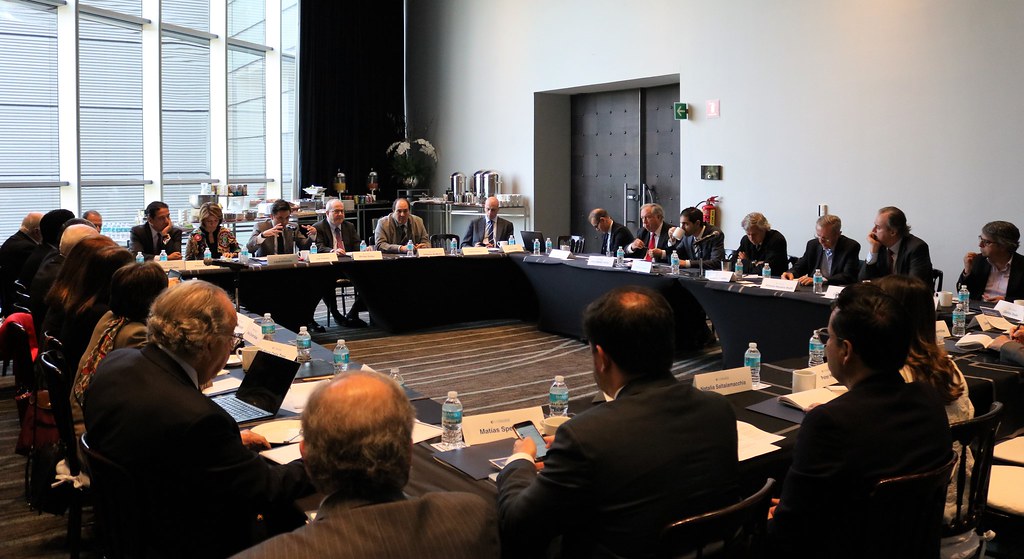